2022/08/04GovGuam, local groups team up with TECO to get stray animal population under control

The Department of Agriculture, in conjunction with Guam Animals In Need, Boonie Flight Project, the University of Guam, and the Taipei Economic and Cultural Office, planned the kickoff with ten visiting veterinarians from National Chung Hsing University in Taiwan, the governor’s office stated in a press release.

The clinic aims to schedule 50 spay and neuter surgeries per day, for a total of 400 surgeries across eight working days. The clinic will run from Aug. 4 through 15.

Members of the public who signed up for the SNIP Clinic waiting list are currently being contacted via email to schedule their appointments.

“Following this community kickoff, the SNIP Program will be officially open to the public, operating out of the Raulerson Spay & Neuter Clinic at the GAIN animal shelter,” said Gov. Lou Leon Guerrero. “As we increase access to spay and neuter services, our administration remains committed to ensuring public safety while making a sustainable impact on the stray population, decreasing animal suffering and educating our community.”

Spay and neuter services will be provided at GAIN for four to five days per week, in addition to quarterly sterilization campaigns at satellite clinics in various villages throughout the island.

The service schedule was funded through increased government appropriations given to the organization.

Cyrus Luhr, president of GAIN, previously told The Guam Daily Post the funds also will be used to organize clinics in the southern part of the island.

“We’ve run a number of successful pilot projects in the past five years preparing for exactly this sort of opportunity. Our clinic in Yigo has the equipment needed to get started, and we have the operational manuals and processes in place to conduct clinics both in Yigo and in pop-up locations around the island,” Luhr said in a September 2021 interview.

Island residents interested in spay or neuter services can fill out the interest form at snipclinicguam.com. For more information, contact the SNIP program at snip@guamanimals.org. 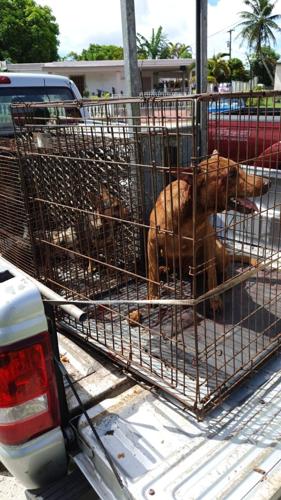 GAIN-BOUND: Captured stray dogs wait to be transported by the Dededo Mayor’s Office staff to Guam Animals In Need after being rounded up in Dededo on Sept. 13, 2021. Dontana Keraskes/The Guam Daily Postclose